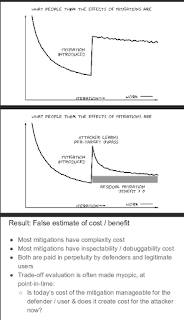 In short: Make it easy for people to understand the design rationale behind the mitigation. Make sure this design rationale is both accessible, and easily debated / discussed. Be precise and quantifiable in your claims so that people can challenge the mitigation on it's professed merits.
Posted by halvar.flake at 9:00 AM