My prediction for the next two years: Apple, Symantec, McAffee, Oracle etc. will get pounded into the ground by lots of bugs being found and disclosed through security researchers that are looking for easier targets than the current MS codebase. And the abovementioned companies won't have monopoly revenue to throw around and fix the issues.

This is a big opportunity for MS to move into all their markets :-) and sell their products as superior on the security side.

While I am in "evil" mood: The german train system is about to be IPO'ed, and there's a lot of debate going on here about details of the contract. What is most interesting but not being debated:
All real estate owned by the Deutsche Bahn AG (the privatized version of the german train system that is going to be floated) is in the books with it's value upon acquisition -- meaning it's value in 1935. The real estate in possession of the DB is, by today's value, worth several times more than the total money they expect to get out of the IPO.

If I was an investment banker, I'd gang up with a bunch of private equity folks, buy the majority in the DB AG once it is IPO'd, and then sell of the real estate. Other countries (USA, Britain) survive without a decent train system, too, and I wouldn't care as I'd have a Rolls and a driver.

Allright, enough of the devil's advocate mode. It was fun seeing my brother the last weekend,
and we always come up with good ideas ;)
Posted by halvar.flake at 2:36 PM No comments:

MSASN1 is hard to read these days -- the code makes heavy use of carry-flag-dependent arithmetic (adc, rlc etc) to check for integer overflows.
Posted by halvar.flake at 2:20 AM No comments: 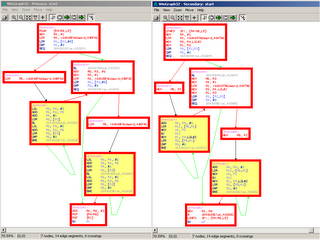 The Vodafone virus dropped by today and brought us some mobile viruses to play with - thanks ! :-)

So cross-platform diffing can be fun -- Rolf ran a diff of Commwarrior.B against Commwarrior.C today, and while B is compiled for standard ARM, C is compiled in 'thumb mode', which is pretty much the same as being compiled for a different CPU (thumb means that all instructions are different).

The amusing result is that even though the compilation is for a different platform, we still get roughly 61% of the functions matched. And the functions, which are clearly the same on the 'structural' (e.g. flowgraph) - level, have completely different instructions, and manual inspection will confirm that these differing instructions end up doing the same.

For those of you that want to verify things manually, click here.
Posted by halvar.flake at 10:13 AM No comments:

Quote from Lock, Stock and Two Smoking Barrels: "I don't care who you use as long as they are not complete muppets".

Having MSOffice 0day is not terribly hard, but one should not burn it by making it drop standard, off-the-shelf, poorly-written bot software. The stealth advantage that one has by sending .DOC files into an organisation should not be given up by creating empty SYS files or dropping DLLs.
Also, registry key adding for getting control on reboot is kinda suboptimal.

I am kinda curious to know how they got caught, but my guess is that the bad QA on the internet explorer injection raised enough crashes to make people investigate.

On a side note, this highlights a few common problems people face when doing client side attacks:
Enough ranting for today.
Posted by halvar.flake at 3:10 AM No comments:

For those that are into malware classification, here's some code that one
can include in a piece of malware to skew the Levenshtein distance described
in the recently published MS paper.

Today is a good day: I got my math homework done before it has to be handed in, and that leaves me some free time to blog :-)

Dana Epp has a post referring to an entry by Tony Lee referencing an EICAR paper on automated malware classification using behavioural analysis. I am not totally unbiased on this as we at SABRE have been working a lot on structural classification of malware recently, so take my following criticism with a grain of salt.

I personally think the approach in the paper is suboptimal for the following reasons:
Taken together this means that the approach presented in the paper can be trivially foiled with very minor high-level-language modifications in the source of the program, whereas the static structural comparisons we use need to be foiled via the use of a strong obfuscation component, which if done moderately cleverly, would also foil the approach from the paper.

I'm not saying the paper isn't good or doesn't touch valid points, but behaviour is so trivially randomized even from a high-level-language level that the approach in the paper is next to pointless once malware authors target it.

On to something kinda different:

A more general question we have to ask ourselves is: Do we really want to measure the accuracy of new, automated malware classification algorithms by comparing them to the results of the manual classification done by AV-vendors so far, which had neither efficient information sharing nor any clear methodology as to how to name malware ? Using any sort of machine learning based on the AV-industry provided datasets needs to be very resilient to partially incorrect input data, as a good number of bots seem to be more or less arbitrarily named.

Microsofts built-in firewall has some really annoying things to it. I am running a laptop connected to an untrusted network and an instance of VMWare connected on a different interface. If I disable the firewall on the VMWare interface, it automatically gets disabled on the global interface. Very cute. Can we get this fixed ?
Posted by halvar.flake at 2:02 AM 1 comment:

"Those that do not have any problems will create some for themselves"
Posted by halvar.flake at 2:59 PM No comments: